I’ve always been a guitar lover, but until a year ago, I never would have thought I could travel around the world with my guitar and make money. For the past five years, I had been a corporate robot and decided that I wasn’t getting any younger. I wanted to see the world and have an adventure.

The process to make this bold move was no easy feat. I had to sell my apartment, my car, and all my belongings that wouldn’t fit into my backpack. My guitar was never an item that I wanted to part with. It had been my constant companion, stress reliever, and mood lifter over the years.

After my guitar and I had been on the road for about six months, money started to get tight, but I wasn’t ready to run home with my tail between my legs. I decided to get to work and see what kind of money I could make with my git.

No matter what city I was living in, I could always find a budding guitarist who needed a few lessons. I had the disadvantage of not being in one place for long enough to grow a following, but it put food on the table (or a few German beers).

When I was shopping for a student, I would check out the local equivalent of Craigslist and put up a posting. MeetUp.com is also a great way to make connections and build your network. Once I even posted “Free Guitar Lessons in Viktoriapark, Gratuity Appreciated.” I had over 20 people come!

Playing on a Street Corner 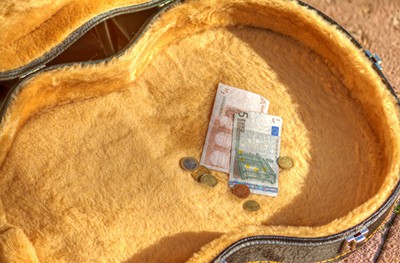 I tried and failed many times, before being successful and having a couple wads of cash to shove in my pocket. Here are a couple quick tips that I’ve discovered:

Put Yourself Out There

Eventually, I went to a local print shop while I was in Budapest and had business cards made. I placed these next to my case, or handed them out when I met people. This was incredibly successful, because I had locals e-mailing me for gigs, lessons, and even guitar questions!

It’s all about who you know. Once you make a friend with a bartender (depending on the city), you can usually get some gig time! I say depending on the city, because some cities are much more musically inclined than others. The entire country of Ireland is filled with great musicians, meaning higher competition.

Once I was stuck in the London Gatwick airport along with hundreds of other travelers due to weather. You could almost cut the stress and anxiety in the air with a knife. People were cranky because their travel plans had been ruined, kids were crying, and arguments were heard throughout the terminal.

Since playing the guitar is my own natural stress reliever, I decided to pull out my instrument and play a couple songs. I kid you not, in about 30 seconds, the mood of everyone in the terminal started to lift. A few toddlers started dancing, businessmen started tapping their fingers and toes to the beat, and everyone was in a happier place.

I probably made some of the best money that day, because I sensed the need for music and bring a little cheer into everyone’s day.

As I write this article, I look back on what my life was like a year ago. I never thought that I would be a wanderer, a traveling musician, and an entrepreneur, but I wouldn’t change it for the world. Am I making less money than I was at my 9 to 5 staring at a computer? Absolutely. But, am I happier and richer from my experiences? Absolutely! 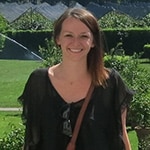 Colleen has a passion for fitness, traveling, and guitars. She enjoys jamming, teaching, and getting others involved in music. Her website, Coustii, focuses specifically on guitars and ukes. Colleen loves to travel and uses her guitar as a conversation starter on the road.

Should I Loosen Guitar Strings Before Shipping?

Guitar Setups: What They Are and Why You (Might) Need One
Scroll to top