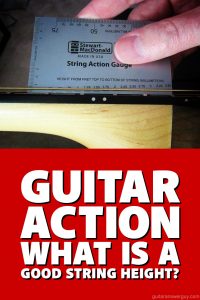 In a previous article, “Action! A Beginners Guide to Understanding String Height,” I introduced the concept of string height, or “action” (the two terms are used interchangeably throughout this article). However, in that article I didn’t say exactly what constitutes a “high” or “low” action. What does it feel like? What are the measurements?

So, it’s no wonder that one of the questions I get a lot from newer guitarists is:

“What’s a good string height for my guitar?”

Totally valid question, because when you’re new to guitar you really have no frame-of-reference for what a “good action” is or what it feels like.

Over time you’ll naturally develop a personal preference for what action feels right for you. Until that time, I’ll give you some actual measurements here that you can use to know whether your guitar is currently set up in the ballpark of low, medium, or high action.

How to Measure Your Guitar’s String Height

When it comes to measurements, the guitar world seems evenly split right now between imperial (inches) and metric (millimeters). Still others like to use fractions.

Here, I’ll be giving all measurements in millimeters and decimal-inches, because that’s what I’m most familiar with. Also, that’ll allow you to use the String Action Gauge that I recommend in this article, regardless of whether you choose the version that’s in millimeters or inches. If you’d like to use fractions, you’ll need to do the conversion to find your values.

We’re going to be dealing with very tiny, precise measurements here, so you can’t use those cheap plastic rulers you used as a kid. Here are the things I use to measure string height (useful for other guitar measurements too): A few of my Hotop blade feeler gauges

Really, this is the only measurement you need when we’re talking about action, but later I’ll discuss the option of measuring at the 1st fret too. You’ll take this measurement at the 12th fret with the strings open (unfretted). We only measure string height under the two outer E strings  (thickest and thinnest strings). There’s no need to measure the middle 4 strings. Here’s what you do:

1. Hold the guitar in the playing position.

This is important. Do not measure string height with the guitar on its back, because gravity will bend the neck just enough to make your measurement inaccurate: Always make such measurements with the guitar upright in the playing position.

2. Measure the distance from the top of the 12th fret to the underside of the lowest (fattest) string. A string action gauge isn’t the only way to measure string height, but it sure makes life a lot easier. I much prefer this over using a ruler. The horizontal black lines on the String Action Gauge are 0.1mm thick. Since my string is slightly above the black line here, I need to add 0.1mm to the measurement shown. So, according to what you see here, the string height of my low E is roughly 2.1mm.

3. Next, measure the height under the highest (thinnest) string in the same manner. It’s normal for the string height to be a bit lower under this string: Reading the height on the high E string can be a little tough. It’s hard for you to see here due to the quality of the photo, but my string is sitting right on the 1.5mm line, so my string height on the treble side is exactly 1.5mm.

Note: Some people (and guitar manufacturers) measure string height at some fret other than the 12th… such as the 17th. Some measure action by first placing a capo at the 1st fret before taking their measurement. I don’t do any of that, but it’s important for you to know this so you can ask your guitar tech how THEY measure. That way the two of you are speaking the same language when/if you take your guitar in for a setup.

When you’re just checking your guitar’s action, it’s not really critical to measure at the 1st fret too. Usually, we only measure the 1st fret if there’s a problem we’re trying to diagnose, like bad intonation, open string buzzing, or strings that are too hard to press at the 1st fret. However, in case you’re curious, here’s how it’s done:

1. Just like we did before, hold the guitar in the playing position.

2. Using a feeler gauge, measure the distance from the top of the 1st fret to the underside of the lowest (fattest) string. Measuring 1st fret action in this manner is difficult (just try it, and you’ll see what I mean). This is why we usually do the “3rd fret press test” instead… which I’ll tell you about at the end of this section.

3. Now, do the same exact thing for the treble side: In reality, I don’t actually “measure” string height at the 1st fret anymore, nor do many experienced guitar techs or luthiers. Instead, I use the “3rd fret press test” which is demonstrated perfectly by luthier Frank Ford on his website here.

What the heck is a “low action” on guitar? What is a “high action”?

Now that you know the proper way to measure your guitar’s string height, let’s talk about some actual numbers. When taking your guitar in for a setup, you should always give the repair tech actual measurements when telling them how you want the action set. Vague terms like “low”, “medium”, and “high” are open to interpretation and may not get you what you’re expecting, depending on who works on your guitar that day.

The following measurements are approximate, not “official.” You’ll get slightly different opinions on these measurements depending on who you ask, or where you search on the Web.

Electric guitars generally can achieve a lower overall action than their acoustic or Classical counterparts.

Classical guitars will have some of the highest action measurements.

Now, you not only know how to measure your guitar’s string height or “action,” you finally have some idea of where your guitar falls on the spectrum of low, medium, and high action. Of course, you can break this down further and talk about medium-low, medium-high, etc. but don’t worry about all that right now. Obviously, there are spaces in between the measurements I gave above, but those should at least give you an idea of where you stand.

Unfortunately, there is no correct or official answer to this. The fact is, a “good” string height is whatever feels good to you. In other words, the goal isn’t always to have your guitar strings as low as possible. There are drawbacks to really low action, as I point out in my other article. Some players like medium action, and some like it high.

That said, I generally recommend the lowest possible action for beginners just starting out. That way you can focus on learning rather than physically fighting the guitar, at least until you build hand strength and dexterity. As you get better, you can begin raising your action a little (or a lot) if you’d like to.

On my electric guitars, I actually don’t like really low action (not as low as what I list above). I’m somewhere between low and medium, which I find better for bending, and feel I get overall better tone and sustain. Just my personal opinion/preference though. On my acoustic guitar, however, I get those suckers so low that it’s probably illegal in some states.

Need Help Setting Up Your Guitar?

Do you need to learn how to set up your guitar? If so, there are a few resources I highly recommend for learning this stuff:

What is your guitar’s action? Now that you know how, measure it at the 12th fret and let me know what it is in the comments section down below. Don’t forget to tell me what kind of guitar you have (electric, acoustic, or Classical).

If you’d like to learn more about this topic, I recommend one or both of these books. They were a huge help in writing this article, and they’ve been my guiding lights since I purchased my first editions many, many years ago: 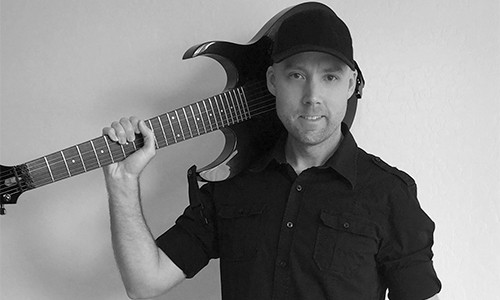 How to Clean and Polish Guitar Frets [Step by Step]