How to Lubricate a Floating Tremolo’s Knife Edges

If you’ve got a guitar with a floating Floyd Rose™ (or similar) bridge that’s set up and balanced correctly, but returns a little sharp or flat after heavy pull-ups or dive-bombs, here’s an easy DIY procedure you can do to to improve its return-to-pitch.

We’re going to lubricate your tremolo’s knife edges. “Knife edges” are what we call the two pivot points of your tremolo that rest against the main height-adjustment studs: If your floating tremolo doesn’t have good return-to-pitch after a heavy dive-bomb or pull-up, adding some dry PTFE lubricant to the knife edges may solve the problem.

And here’s the kicker: you don’t have to remove your tremolo nor even remove your guitar strings to do this procedure.

Well, you can completely remove your tremolo or strings, but what a pain eh? Instead, I’ll show you how to do this procedure with the tremolo and strings on, and tuned up to pitch*. It’s surprisingly simple and once you understand the procedure you’ll be able to do it in about 5 minutes.

*Note: If adjusting your trem’s height adjustment studs under full string tension makes you uncomfortable, you absolutely can loosen your strings if you’d like. Loosening your strings simply adds a few more minutes to the procedure, but do whatever makes you most comfortable.

You don’t necessarily need these exact items or brands, but they’re what I actually use whenever I do this procedure. They’re products that I know work well. You’re free to use something else, but if you do please research and be sure you’re using the right stuff. Don’t use wooden toothpicks for this because they’ll absorb too much of the lubricant. Size varies depending on which tremolo you have, but this is usually 3mm (Floyds) or 4mm (Ibanez).

This is an extremely easy procedure that takes just a few minutes. It’ll seem a bit involved and drawn-out here because I’m trying to “teach”… literally laying everything out and explaining it step-by-step. However, once you understand the basic premise here you can skip a lot of the formalities and knock this out in about 5 minutes or less. A guitar tech doing this procedure during a live show can do it in a few seconds.

1. Put your guitar into a safe, securely supported position.

Having a proper workspace ensures that both of your hands are free to work without your guitar sliding around or moving. You don’t necessarily need a guitar work mat or neck rest like I have here, but they sure make this kind of work easier. They’re great to have for bread-and-butter guitar maintenance too, like string changes and routine cleaning. My trusty work mat and neck rest by Music Nomad

If you don’t have a guitar neckrest or work mat like these, don’t worry. I got by for years using bathroom towels as a work mat and stacked books as a neck rest. Just be sure neither the body or the neck of the guitar can potentially slide off. Buy a roll of non-slip padding at the grocery or hardware store. Put that between your guitar and the bathroom towels and your guitar won’t slide around as much.

2. Rotate one of your tremolo studs 180 degrees counter-clockwise.

First, read the “note” in yellow up above if you haven’t already.

Insert your tremolo’s bridge height adjustment hex wrench, and take note of it’s position (which way it’s pointing). Got it? Now, rotate the hex wrench approximately 180 degrees counter-clockwise. This exposes the area of the bridge stud that is normally pressed tight against your tremolo’s knife edge, effectively pointing it forward so that you can add lubricant. 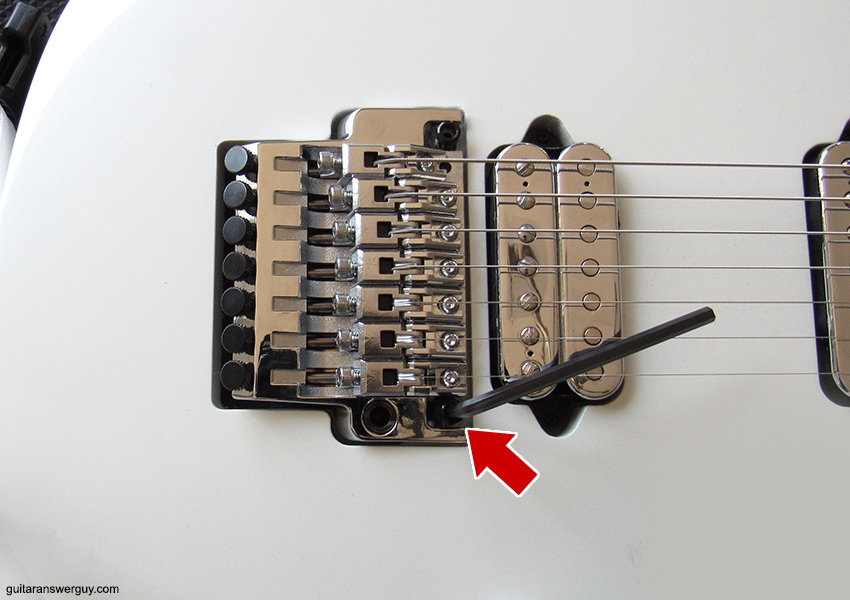 3. Shake the heck out of your teflon lubricant.

This DuPont teflon lubricant tends to settle and separate, so shake it really well before use. Back when I bought mine (what you see in these photos), the bottle was clear, so it was easy to see when the bottle was well mixed. However, I believe DuPont has repackaged this into a solid black bottle, so you can’t see the liquid inside. Just shake it for 10 – 15 seconds and you should be fine. Give your DuPont Teflon lubricant a good shake before use

4. Apply lubricant to the sharp end of the plastic flosser/toothpick.

Be sure you do this part over a paper towel, because this stuff is water-thin and a lot of it is going to drip. Put 2-3 drops on the sharp toothpick-end of the flosser so it’s well-coated. You won’t be able to see the lubricant on the tip because it’s clear, but rest assured that it’s on there.

As soon as you’ve done this immediately move to step 5 below. Definitely do this over a paper towel, because it’s water-thin and most of it will end up on the paper towel.

5. Quickly transfer the lubricant to the tremolo stud’s v-groove.

You need to work kinda fast here, because this type of lubricant air-dries quickly. Rub the sharp tip of the toothpick (where you applied the lubricant) into the v-shaped groove of the tremolo stud. This is the groove that your tremolo’s knife-edge is normally seated into, but we’ve exposed the surface by rotating the stud 180 degrees. 6. Apply a little more lubricant to the stud by repeating steps 4 and 5.

Repeat steps 4 and 5 at least once more to ensure enough lubricant has adhered to the tremolo stud. However, don’t get carried away. This DuPont teflon lubricant is super slick and too much can actually cause the tremolo to slip off the tremolo studs during certain maintenance procedures. It’s rare, but has happened to me more than once.

This lubricant is water-thin and invisible, so you won’t be able to see it on the stud. Just do this procedure 1-2 times and rest assured that you’ve put plenty on there, even though you can’t see it.

7. Repeat this entire process on the other tremolo stud.

Follow the same procedure to lubricate the other tremolo stud.

8. Rotate both studs 180 degrees clockwise–back to where they originally were.

Once you’re done, rotate both tremolo studs back to where they originally were. This effectively rotates the lubricant into that tight space where the knife edges rest against the studs–exactly where you want it.

9. Do a few heavy dive-bombs and pull-ups.

I don’t know if this step is actually necessary, but after doing this procedure I feel compelled to work the trem a bit to distribute the lubricant over the contact points. 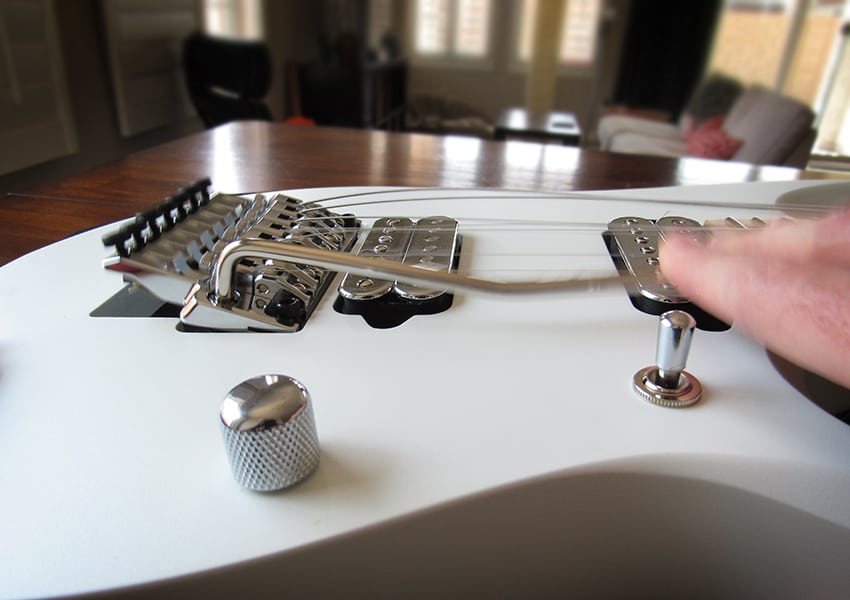 There you have it!

Also note that, even with this super-slick DuPont teflon lubricant, the procedure will need to be repeated at regular intervals. How long it’ll last, I can’t say. It depends on how old your knife edges are and how heavily you use your tremolo. I’m a heavy (think Vai-style) tremolo user, and I re-apply this teflon lubricant about once a year.

As I’ve alluded to a couple times in this article, this procedure assumes you already understand how to properly set up and balance your floating tremolo, and just need to improve its return-to-pitch. This post isn’t a “how to set up your Floyd” post, nor does it attempt to cover other issues that might be causing tuning instability. That’s a whole other blog post that I plan to write some day soon.

I hear complaints from guitarists who’ve never used or owned a guitar with a floater–who don’t understand that the expressive freedom you gain with a fully floating tremolo comes with some small tradeoffs. One such tradeoff is tuning stability.

It’s important that those of you with floating tremolos have realistic expectations.

Most of the guitars I’ve owned throughout my life have had fully floating Floyd-style bridges. Only a few of them, as measured with a strobe tuner during play, has ever consistently returned exactly to pitch after a heavy dive bomb. They usually get pretty close–enough that the average human can’t hear a difference, but 100% perfect return-to-pitch is the exception, not the rule.

Other Lubricants Work Too 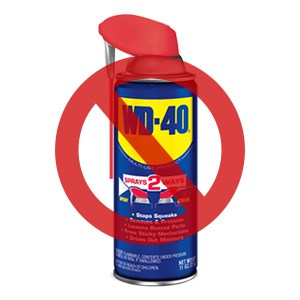 Standard WD-40 is not a lubricant. Do NOT use it for this procedure.

Though I love and highly recommend the DuPont Teflon lubricant, it’s not the only lubricant that’ll work for this procedure, so feel free to shop around for something else if you’d like, but keep a few guidelines in mind:

Do you have a floating tremolo? If so, how’s the tuning stability? Does it return sharp or flat when you do a heavy dive-bomb or pull-up? Tell me all about it in the “Leave a Reply” section down below!

How to Stretch Guitar Strings [Step by Step]
Scroll to top