Results at a Glance

Very simple to use, but need average or better hand strength to operate

It’s not cheap. It’s a premium capo made from premium materials & carries a lifetime warranty

Used correctly, it’s as safe as any other capo

Buying capos can be a pain, and ends up being more like a collection, of sorts.

Unless you can try it on your guitar(s) first, it’s a real crap-shoot. I can’t tell you how many capos I’ve returned over the years because it knocked my strings out of tune or let some strings buzz. Some capos actually did both. I own 3 different capos because no single one works well on all my guitars.

Capo manufacturers have a seemingly impossible challenge, however. With all the different guitar necks out there, they’re forced to build a radius (curvature) into their capos that’s “one size fits most.” This radius is usually somewhere around the 12″ mark, and the result is a capo that works well for some guitars, but not others.

The Thalia capo company has taken a unique approach to tackling these challenges. Realizing that “one-size-fits-most” isn’t good enough, they’ve created a capo that accepts interchangeable fret pads, which allows you to essentially customize the capo to work perfectly on any guitar, including 12-string guitars.

It comes with a number of other little goodies as well, which you’ll see below. 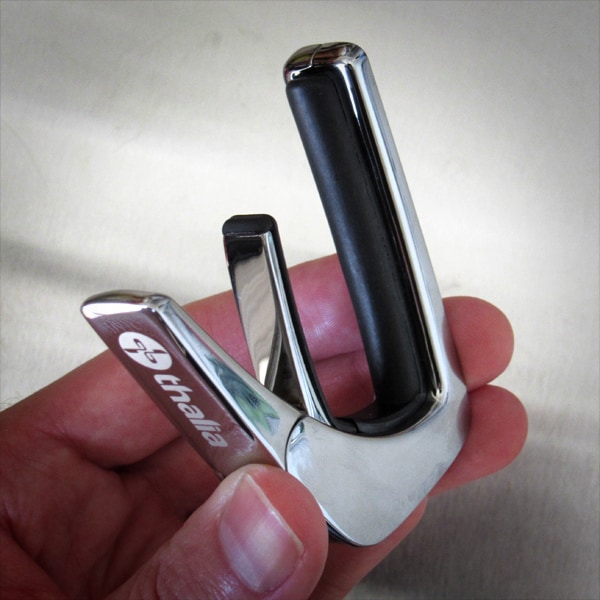 Note that in some of the photos you may see a “Partial Rubber” fretpad tuning kit as well as a package of “Engineered Exotic Wood Picks.” These are not included with Thalia capos–they’re extra items that I bought separately.

When it comes to packaging I think Thalia took some cues from Apple. Even the shipping box is nicely branded inside: 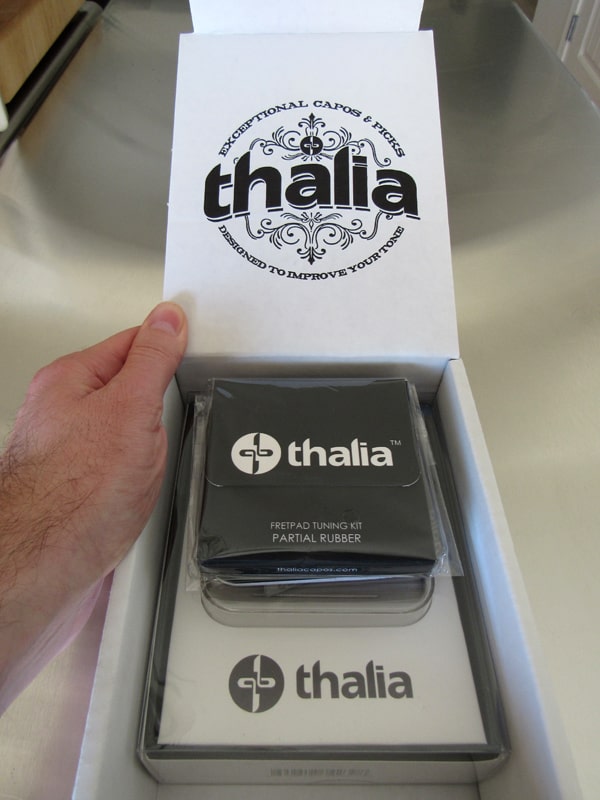 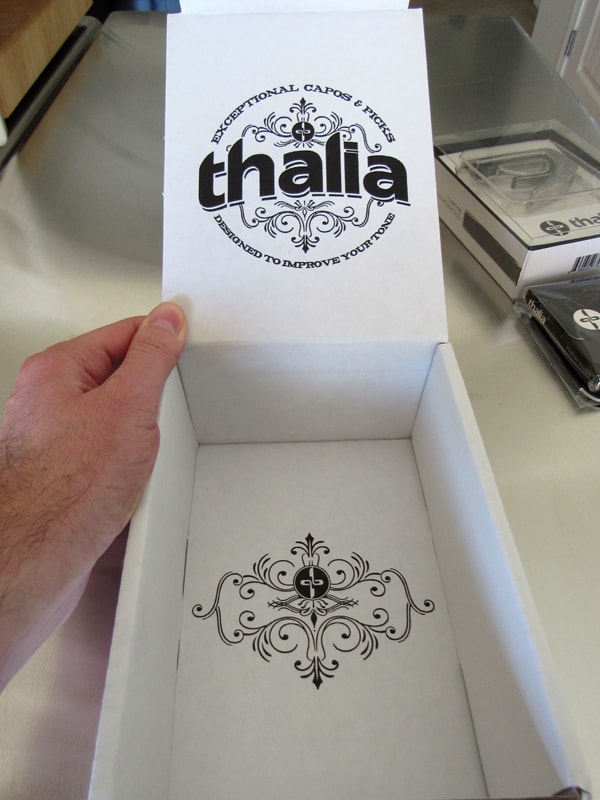 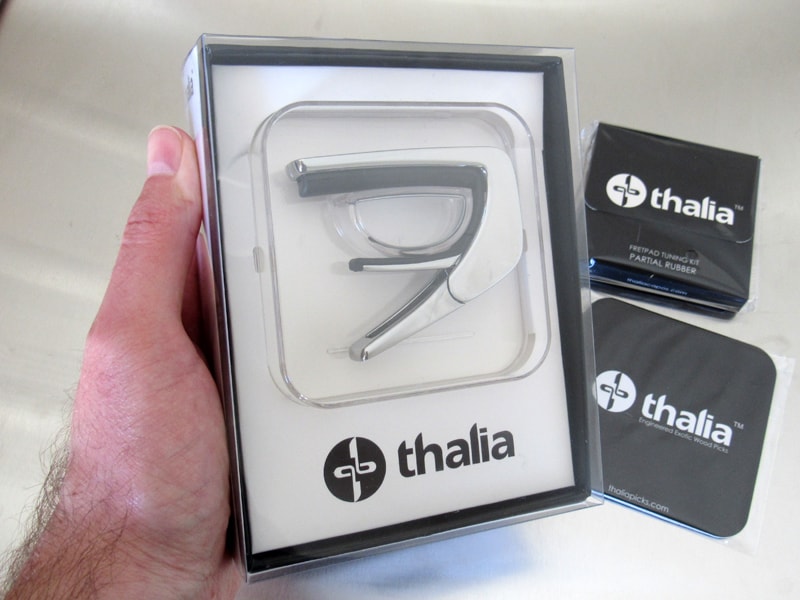 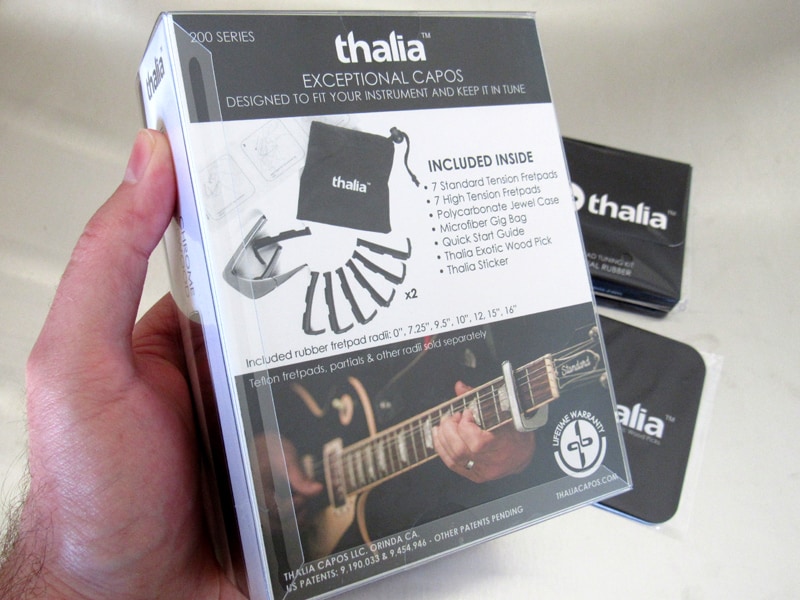 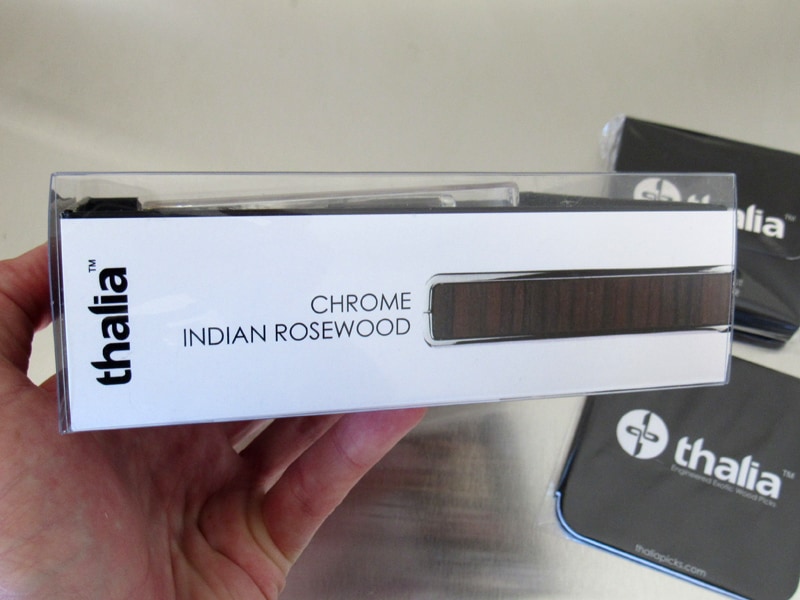 Once you open the box, there is a boatload of extra goodies waiting for you: 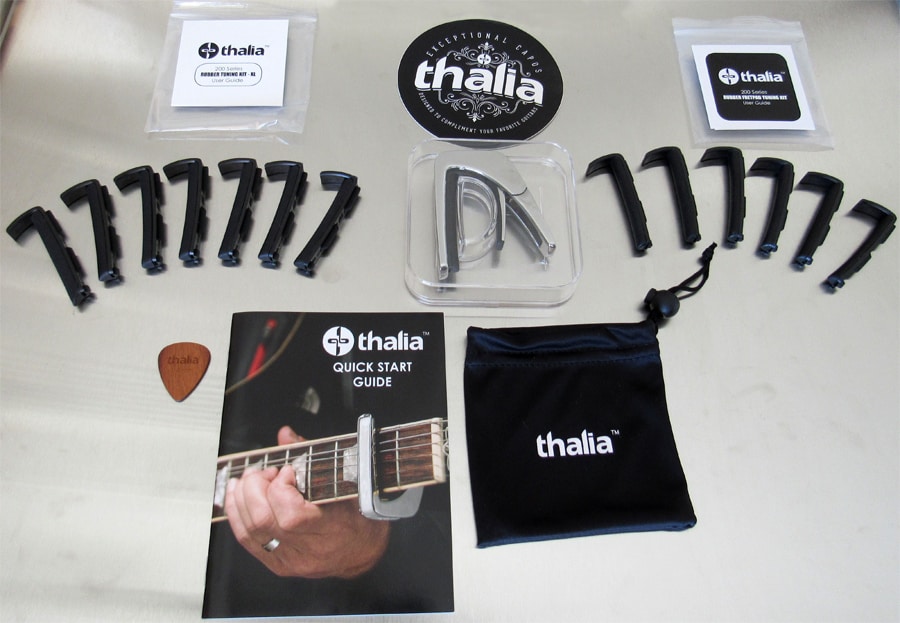 Every Thalia capo comes with a set of 7 standard tension and 7 high tension fretpads.

The Thalia comes with a Quick Start Guide. I didn’t need to read it (and I didn’t) before using the capo, changing fretpads, etc. It was all pretty self-explanatory to me. I actually enjoyed just thumbing through the booklet after I’d already been using the capo for awhile. 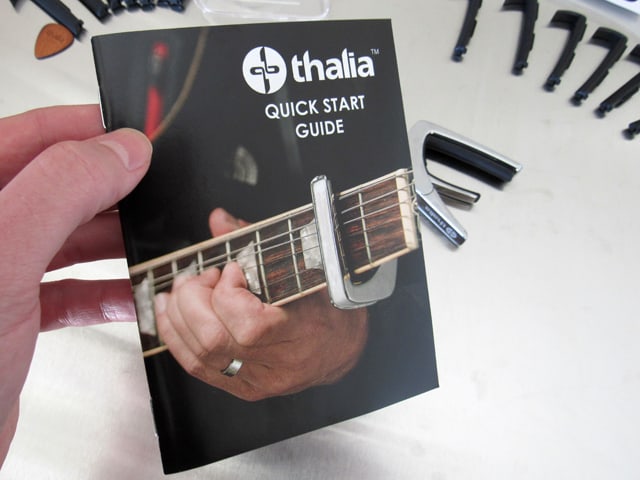 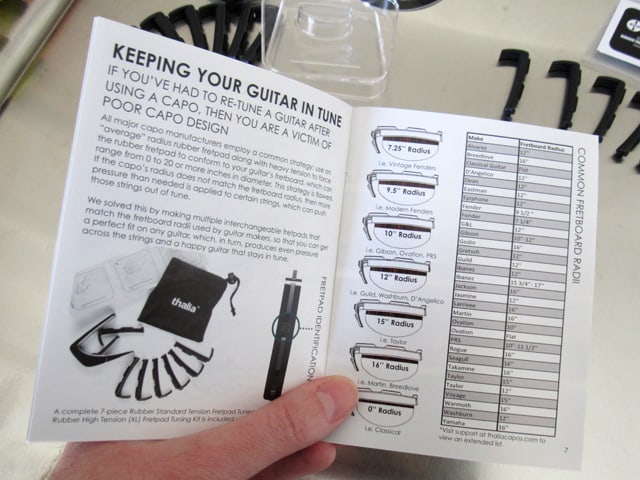 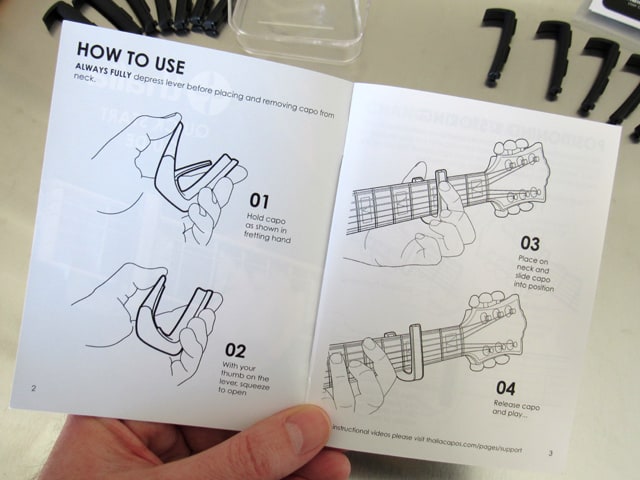 A Closer Look at the Thalia Capo

My Thalia is the chrome and rosewood version, which is one of the more understated styles available. Regardless, it’s still a gorgeous capo, and if you want something different or fancier, you’ve got MANY styles and custom options available to choose from. 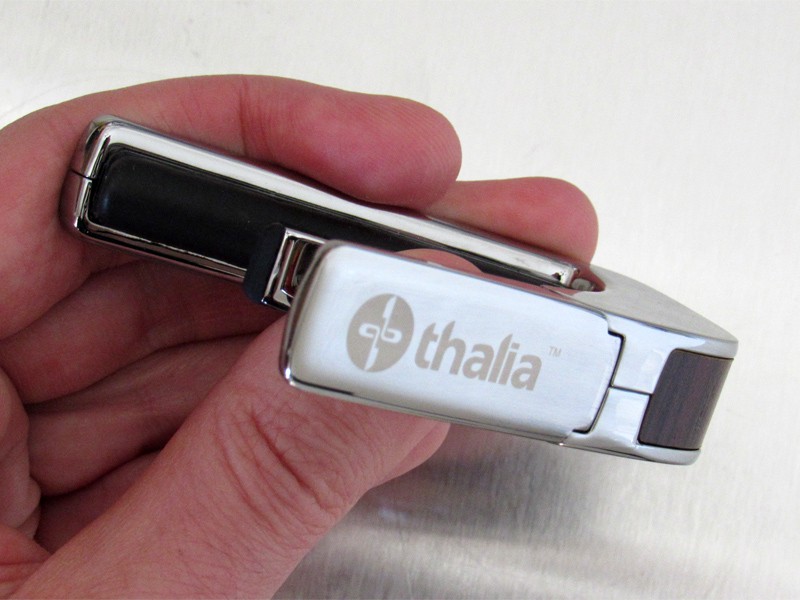 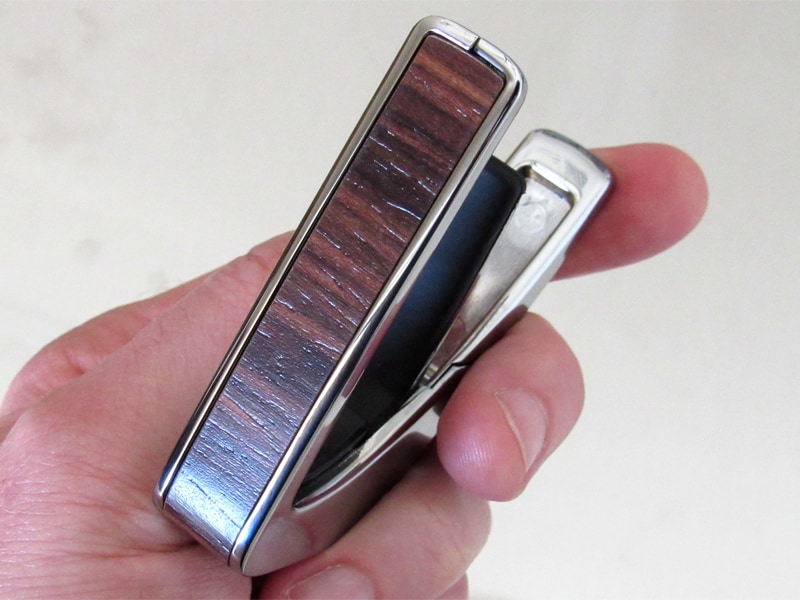 Changing the Thalia’s fretpad is easy. Simply pop it out as shown here. Once it’s out, snap the new one in by doing this same procedure in reverse: 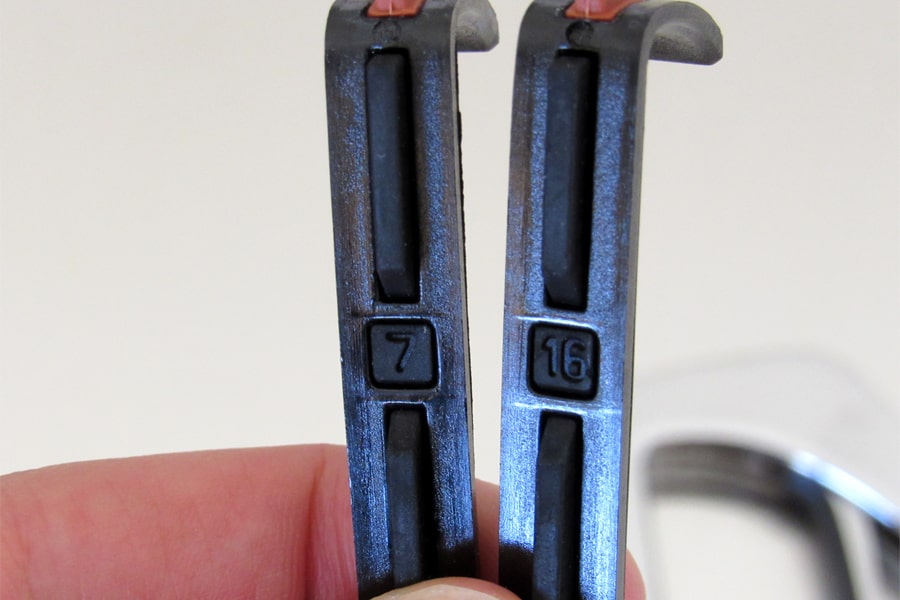 Note: On some rare occasions, using the fret pad that exactly matches the radius of your fretboard doesn’t work well. If that’s the case, simply try the next size up or the next size down, and your issue will disappear.

Size-wise, the Thalia is definitely a larger, beefier capo.

Size comparison of the Thalia vs. 2 of my other capos

For this review, the Thalia was tested on the following guitars (only the Breedlove is shown in photos):

As the opportunity comes up, I’ll try the Thalia capo on more guitars and update this review accordingly.

To operate the Thalia, simply squeeze the spring-loaded thumb lever and the capo opens. Release pressure on the thumb lever and the Thalia automatically closes. About 15 – 18 pounds of pressure is needed to open the lever, so you’ll need average-or-better hand strength. The spring tension is firm, so if you have very weak hands or arthritis, you may have trouble using the Thalia: 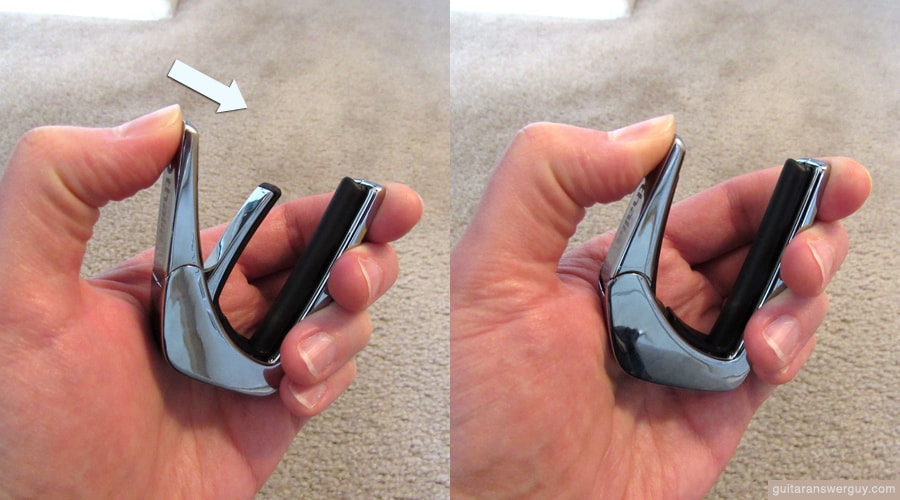 Squeeze and release the Thalia’s thumb lever to operate

The Thalia capo can be clamped from above or below–it’s really up to you. I prefer to have the Thalia clamped on from th top of the neck, because this prevents me from accidentally dropping it during quick changes. However, you may prefer clamping from underneath. Both work equally well, so do whichever feels best to you:

My preferred placement: over the top

Many people seem to prefer clamping the Thalia underneath, which is perfectly fine 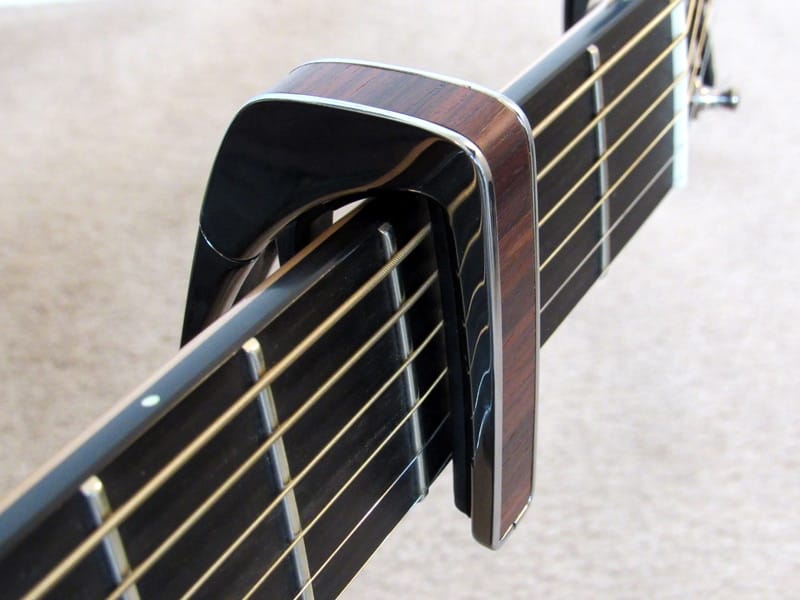 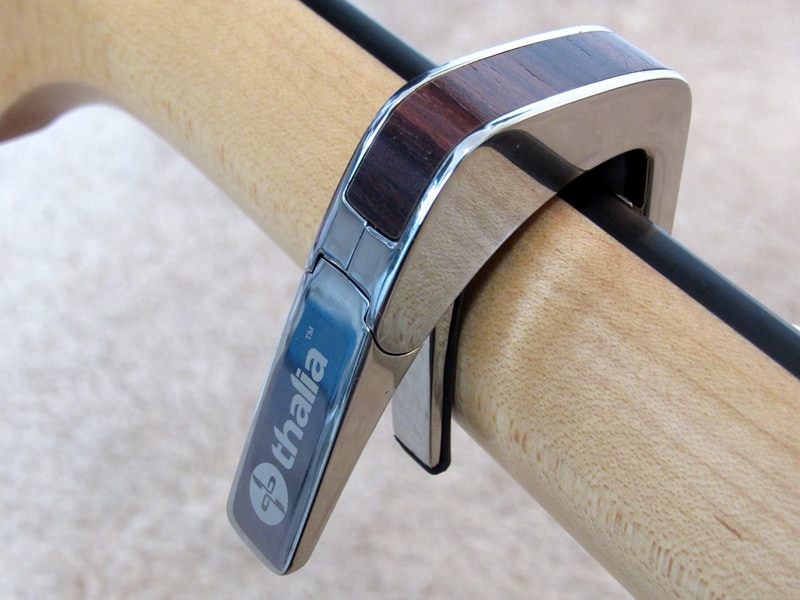 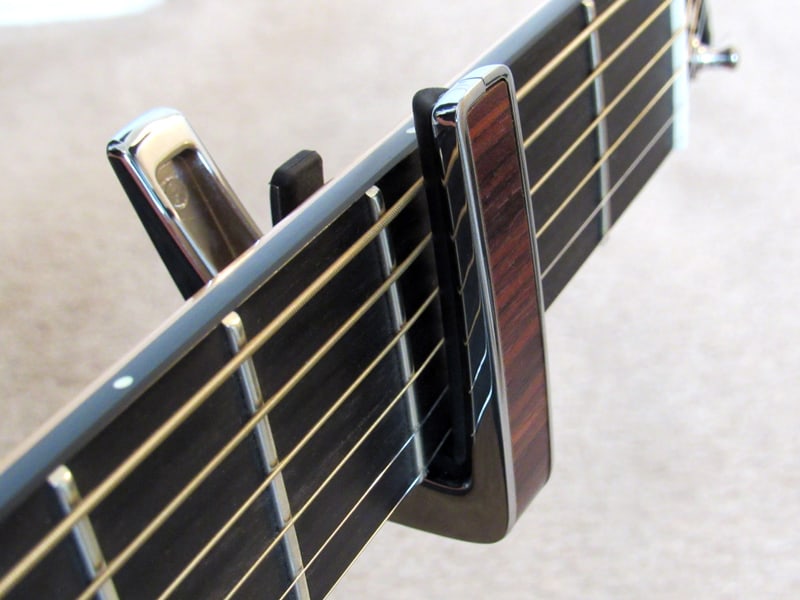 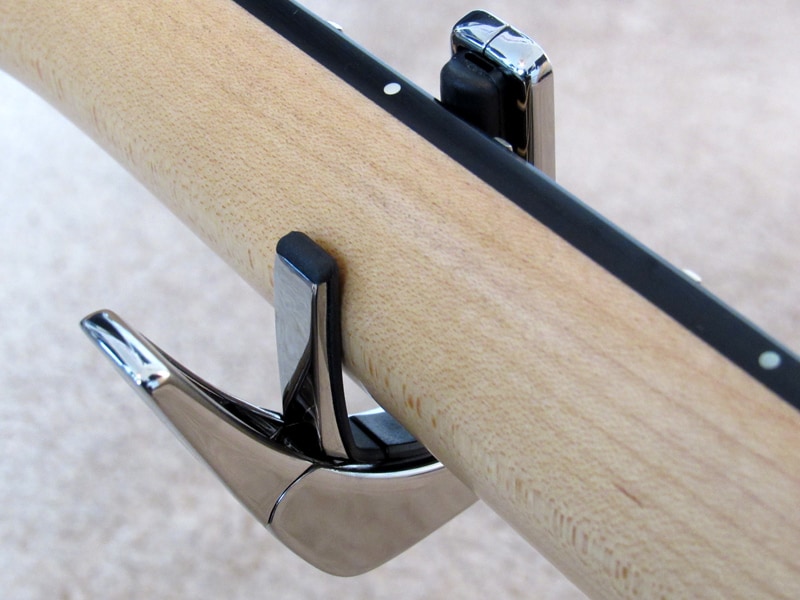 Now, you may be thinking, “That capo looks big. Isn’t it heavy?” Sure, the Thalia by itself has a bit of heft to it, but it’s not heavy on your guitar. In other words, it doesn’t have any effect on the guitar’s balance nor can you tell that it’s on there. 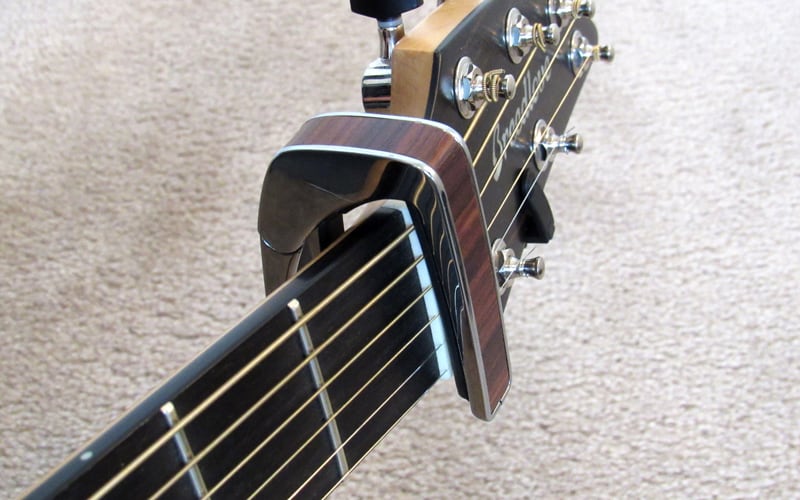 When not in use, you can clamp the Thalia on your guitar’s nut without affecting the tuning

One last thing worth noting: Unlike other capos, the Thalia is more forgiving of bad placement. This is because you’re able to choose the fretpad that matches your fretboard radius. So, if it’s a bit crooked and/or placed in the middle of the fret, your guitar will still be in-tune and buzz-free.

So, How Did it Perform?

The Thalia capo is, hands-down, the most effective capo I’ve ever used. It’s hard to imagine the Thalia capo not working on any standard acoustic or electric guitar, banjo, or ukulele. The ability to customize the Thalia’s curvature (and thickness) with one of the 14 included fretpads makes it nearly impossible for this capo to fail. Hell, in an effort to find some kind of fault I tried it on my 5-string bass. It still worked perfectly up to about the 7th fret. After that the bass’ neck became too wide.

I had zero issues with the Thalia squeezing my notes sharp. It can happen, but in those rare cases you simply shift the capo a bit and the issue disappears.

The Thalia capo is very straightforward and easy to use. It’s more forgiving of bad placement, due to the fact that you can customize the fratpad to exactly match your guitar’s fretboard radius and neck thickness. This means you can have it slightly crooked or placed somewhere in the middle of the fret without any issues.

If you have average or better hand strength, you’ll have no issues using this capo. However, the amount of pressure needed to squeeze open the lever may be too much for some people. This is why I’ve deducted 1 star here. My hand visibly shakes a bit whenever I have to squeeze the lever, and my girlfriend was unable to squeeze it at all unless she used two hands. It’s not unreasonable, but those with arthritis or otherwise weak hands (I have both) may struggle a bit.

Only 3 stars here because, let’s be honest, the Thalia capo isn’t cheap. As far as I can tell, it’s the most expensive capo available, but the value is there–especially if you own many different guitars. The Thalia is built like a tank with gorgeous, quality materials. You can be pretty confident that it’ll work flawlessly on all your guitars (and other stringed instruments). Lastly, it carries a lifetime warranty.

Let’s face it: some people just can’t justify the cost of a Thalia, and that’s okay. It’s not for everyone. However, for those who use a capo a lot and want one that’s basically guaranteed to work on everything, the Thalia is a worthwhile purchase.

This capo is built like a tank. It doesn’t feel cheap at all, and instead feels like a premium piece of gear. The capo has some weight to it, but it doesn’t feel heavy on the guitar neck, even when used in the 1st position. The wooden inlay (other finishes available too) is a very nice touch, and both the rubber and nylon fret pads all feel sturdy and built-to-last as well. I really could find no faults with the Thalia’s build quality.

Unless you do something stupid, the Thalia is as safe as any other capo. I deducted half a star here simply because the rubber pad on the back of the lever is fairly firm. With normal usage and common sense, you have nothing to worry about and your guitar will be absolutely fine. However, be a doofus and leave the Thalia clamped in the same spot for several weeks, and you may have some dents (this is my opinion only–not tested nor confirmed). This is true of just about any capo you leave clamped on your guitar for excessively long periods. So, don’t do that.

What Others Are Saying

Here’s what a couple other guitarists think of the Thalia capo:

Recap: What I Liked

Objectively, I couldn’t find many flaws with the Thalia guitar capo. It’s the only capo you can buy, sight-unseen, that’s pretty much guaranteed to work on all of your guitars (or banjo or ukulele). I only wish I’d found it years ago, before I blew a bunch of money investing in different capos for all my different guitars.

If you’re hung up on the the premium price tag, well, I’m probably not going to be able to change your mind. Without actually trying a Thalia yourself, you probably won’t be able to bring yourself to drop that kind of money on one.

I’d love to lend you mine to try out, but this is one capo I’m never letting go.

Tonika – The “Worst Guitar Ever”